My 8th great-grandmother Margarietje Polhemus was born in 1642 in‪ Itamaracá‬, Pernambuco State, Brazil and died in 1702 in Flatbush, Brooklyn, New York. Her father Dominie Johannes Theodores Polhemius was a Minister of the Dutch Reformed Church in Holland and in 1637 he was part of the Dutch migration to Brazil, taking over the Colony of Recife from the Portuguese. He was appointed Minister to the Dutch Garrison at Fort Orange on the Island of Itamaracá.

After years of turmoil and revolts by the Portuguese, the Dutch abandoned Itamaracá on December 13, 1647. At this point, six-year-old Margarietje and her family would have moved to the relative safety of Recife, on the mainland. Battles with the Portuguese at the Dutch settlement of Recife continued for six more years. The Dutch finally lost control of Recife on January 28, 1654, leaving the Portuguese with the colony of Brazil and putting an end to Nieuw Holland.

The Dutch fled on sixteen ships back to Holland, but Dominie Polhemius was on a different ship than his wife and children. The ship he was on along with twenty-three members of the Jewish community of Recife, was captured by Spanish pirates, they were rescued soon after by the French ship, “Le Charles” and after agreeing to pay for their transportation, they eventually reached the New Amsterdam. The Dutch Governor Pieter Stuyvesant requested that Dominie Polhemius stay and lead the Dutch Reformed Church of Flatbush, along with the churches in the Towns of Breukelen and Flatlands. The three churches operated as “collegiate” churches, sharing Domine Theodorus Polhemus as their first pastor. After two years, once he was established in New Amsterdam, his wife and children, who had been living in Holland, sailed back across the Atlantic and joined him in Flatbush.

Maybe there is another explanation as to why the family was separated. My DNA very clearly indicates that I descend from Brazilian Native Americans and Central African. I propose that Margarietja’s father was most likely a mulatto soldier serving in the Dutch garrison of Itamarca.

Read more about the related histories of Brazil, the Netherlands and New Amsterdam, here.

Margarietja immigrated to New Amsterdam when she was 14 years old and in 1660 she married Willem Guljanse Cornell. They had six children and I descend from their daughter Maria Willemse Cornell, who was born in 1664, in Flatbush.

FYI: Our family is not related to Ezra Cornell, the Founder of Cornell University. 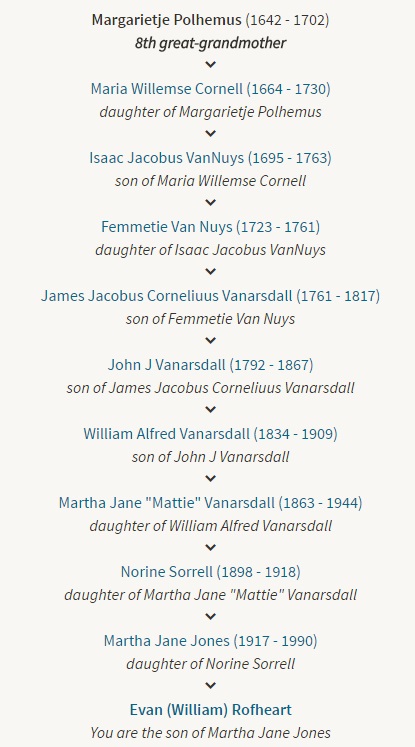