Recently I discovered that I am descended from the 2nd Governor of the Maryland Colony,  Thomas Francis Greene,  one of the “twenty gentlemen of very good fashion” who sailed from England to Maryland on the Ark in 1634, and was a founder of the Colony.

The two ships, the Ark and the Dove carried the first two hundred settlers to Maryland, and established St. Mary’s City, which became the Provincial Capital.

This is how I descend from him: 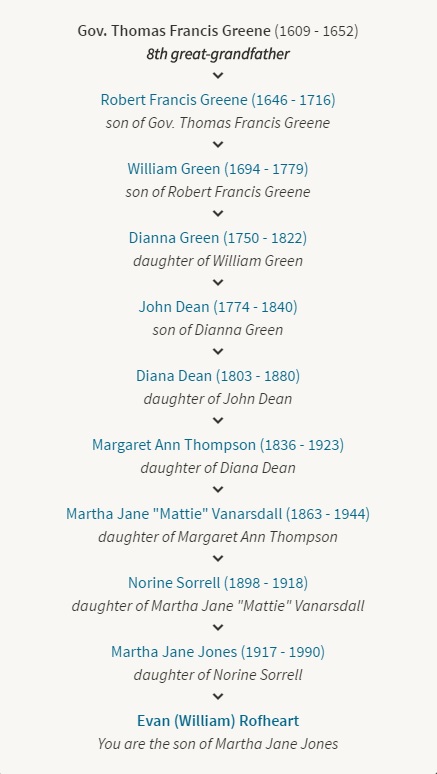 Thomas Francis Greene was appointed the 2nd Provincial Governor of the colony of Maryland in 1647, by the royally chartered Proprietor of Maryland, Cecilius Calvert, 2nd Baron Baltimore. He replaced Leonard Calvert, who had been the first Governor of the Province and died in office. After one year, Governor Green was replaced by William Stone.

In addition to Provincial Governor of Maryland he was also at various times a Member of His Lordship’s Council, Commissioner of the Treasury and Magistrate.

Maryland began as a proprietary colony of the Catholic Calvert family, the Lords Baltimore under a Royal Charter, and its first eight governors were appointed by them. When the Catholic King of England, James II, was overthrown in the Glorious Revolution, the Calverts lost their charter and Maryland became a royal colony. It was governed briefly by local Protestants before the arrival of the first of 12 governors appointed directly by the English Crown. The Royal Charter was restored to the Calverts in 1715 and Maryland’s Governors were again appointed by the Calverts through the American Revolution.

Thomas Francis Greene was born at Bobbington, Kent, England in 1610, the son of Sir Thomas Greene and Lady Margaret Webb. Sir Thomas was made Knight Bachelor of the Realm by James I in 1622 at Windsor Castle. In 1634 Thomas Francis Greene married Anne Gerard, known also as Ann Cox, they built their home, “St Anne’s” on Green’s Freehold, located near St. Mary’s City. The marriage of Thomas Green and Ann Cox is considered the first Christian marriage on Maryland soil.

My descent is through Thomas Greene and his 2nd wife, Mistress Winifred Seybourne, who was born in approximately 1610, in England. They were married on April 2, 1643 and then had a son Robert Francis Greene in 1646, he would become my 6th Great Grandfather. Winifred Seybourne (my 7th Great Grandmother) emigrated to Maryland in 1638, (the title Mistress was given to an unmarried woman of gentle birth who had acquired an estate and independent status). On 30 July 1638, she received 100 acres for transporting herself and another 100 for transporting Mistress Troughan, she was from a wealthy family and had financed both of their passages.

Greene was one of the most prominent and influential men in public affairs in Maryland until his death in 1651. My ancestors are of Maryland’s “first families” who are considered those who are the descendants of Sir George Calvert (Lord Baltimore) and of those passengers who came on the Ark and the Dove in 1634.

Research for this article relied on Wikipedia and the blog tracemyorigin.com.