The Related History of Brazil, the Netherlands and New Amsterdam

It is generally accepted that the first European to colonize Brazil was Pedro Álvares Cabral on April 22, 1500, under the sponsorship of the Kingdom of Portugal. All of Brazil was claimed by Portugal, but from the period of 1630 to 1654, the Dutch West India Company (WIC) occupied the northeastern portion of Brazil.

Dutch ships had been sailing up the Amazon river at the end of the 16th century to trade with the indigenous peoples there, and in 1630, attracted by the high profits of sugar production, the WIC attacked and destroyed Olinda, headquarters of the Portuguese colony. From 1630 onward, the Dutch Republic came to control almost half of Brazil’s area at the time, with their capital in Recife. 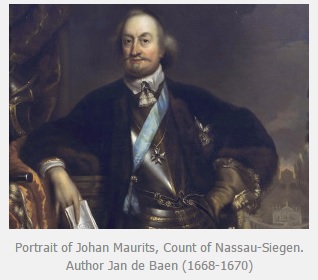 The governor, Johan Maurits van Nassau, invited artists and scientists to the colony to help promote Brazil and increase immigration.

The struggle against the Portuguese colonists would last until 1654 when the Dutch were defeated and withdrew. During this period, the Dutch would conquer the Portuguese forts and build new ones in an unsuccessful attempt to safeguard the mills where sugar cane was processed.

The Dutch period is considered important in Brazilian history, especially the seven years (1637-1644) of Johan Maurits van Nassau’s governorship. During his rule, the territory of Dutch Brazil expanded, as did its influence on the Atlantic slave trade (with the conquest of Elmina and Luanda). The small settlement of Recife also underwent major urban and architectural development inspired by Renaissance principles. The intellectuals that Johan Maurits sponsored included the artists Frans Post and Albert Eckhout, the naturalist and astronomer Georg Marggraf and the physician Willem Piso, they documented the new land putting Brazil on the map, literally, from then on.

In the year 1630, the northeastern region of Brazil was inhabited by indigenous peoples, Portuguese colonists and slaves of African descent. In the hundred years of Portuguese colonization, these populations had already mixed to a certain extent, and mulattos and mamelucos were common.

The WIC’s soldiers and the Luso-Hispanic army troops were also of varied nationality. Another relevant group that migrated and settled in Brazil were Jews, who had fled the Inquisition in Spain and Portugal. But the most substantial migratory flow to Brazil were West Africans, forced to cross the Atlantic and to enslaved on the plantations in the Americas.

After the Reconquest of Recife by the Portuguese in February 1656, the Dutch colonists boarded ships back to Amsterdam. Arriving in the Netherlands, which was unfamiliar to many of them, the displaced colonists were encouraged by the WIC to go back across the Atlantic once more, now to New Amsterdam and many of them did. My 8th great-grandmother Margarietje Polhemus was born in 1642 in‪ Itamaracá‬, and eventually migrated with her parents, Dominie Johannes Theodores Polhemius  and Catherin Van Der Werven to New Amsterdam.

During the early 1640’s, almost 1,450 of Recife’s three thousand citizens of European descent were Jews, who had come seeking religious freedom and economic opportunity. The Jews of Recife were the first to openly identify as Jews and worship in the Americas. An earlier migration of Converso and Crypto-Jews (who practiced in secret) from Spain and Portugal helped populate Brazil in the 1500s.

Recife’s Jewish population founded the first synagogue in the Americas, Kahal Zur Israel Synagogue, in 1636. Upon the Portuguese victory, having only recently escaped persecution by the Inquisition, the Jews of New Holland felt fortunate to be expelled along with the others. Twenty-three of these Jewish immigrants sailed to New Amsterdam, where they formed Congregation Shearith Israel in 1654, which was and is America’s first Jewish congregation.

Paintings by Albert Eckhout on WikiCommons