After much research, it seems to me that I probably descend from a mulatto solider in Dutch Brazil.

My DNA from 2 major companies both show about 1% to 2% South American native. 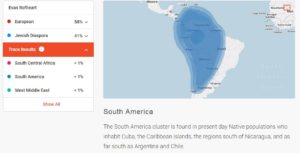 My three youngest kids’ tests on ancestryDNA all show 1% South American and one of the kid’s ethnicity estimate at My Heritage is 1.4% Nigerian. With two different samples of my DNA (one from ancestry and one from 23&me) the analysis at FTDNA shows 1/2% -2% of West or South Central African DNA.

This DNA would have to be from the “real” father of my 8th Great Grandmother, Margarietje Polhemus, who was born in the tiny Brazilian Dutch outpost of Itamarca in 1642.  A Non Paternal Event.

Here is a painting (Mulatto Man of Brazil from the book Albert Eckhout: een Hollandse kunstenaar in Braziliëof) of one of the mulatto soldiers serving in the Dutch garrison of Itamarca in the 1640s. I could see how my 9th Great Grandmother might have strayed from her prim and proper minister husband. Maybe this is even my 9th Great Grandfather. Note the ripe hanging cocoa fruit in the painting, in Dutch art of the 1500s and 1600s fruit is a symbol identified with sexuality and fertility.

The Spanish and Portuguese had been in Brazil for over 100 years, and there were many mulatto soldiers, with mixed Spanish, African (slave) and Native parentage. The Africans were of South Central African descent – the Mbundu People of Portugese Angola.

As far as DNA goes, when it is under 1% it could be caused by “noise” but when it is repeated from two different tests and also in my kids’ tests then it is a legitimate non-noise percentage.

Of course where that DNA came from is a completely speculative theory at this point.